Skip to content
HomeBlogPirates of the Caribbean : Master of the Seas – Monkey Chase

Late last week, I received a pop-up in Pirates of the Caribbean : Master of the Seas, indicating an upcoming contest. It looked like : 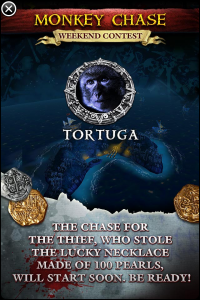 Monkey Chase – Weekend Contest – Tortuga – The chase for the thief, who stole the lucky necklace made of 100 pearls, will start soon. Be Ready!

Unfortunately, I was out of town, in an area with nearly no cell or internet access. I did see another pop-up indicating that this was going to be recurring : 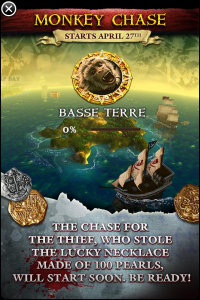 Monkey Chase – Starts April 27th – Basse Terre – The chase for the thief, who stole the lucky necklace made of 100 pearls, will start soon. Be Ready!

Then, today I’m presented with: 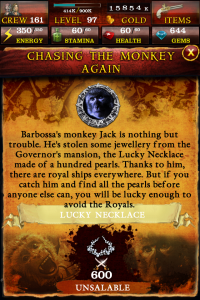 Chasing the Monkey Again
Barbossa’s monkey Jack is nothing but trouble. He’s stolen some jewellery from the Governor’s mansion, the Lucky Necklace made o a hundred pearls. Thanks to him, there are royal ships everywhere. But if you catch him and find all the pearls before anyone else can, you will be lucky enough to avoid the Royals.

Onward to the finding the monkey! You’ll find that the main screen now has a picture of the monkey and your progress towards the challenge. You will also see how many people have already been able to complete the challenge. The compass with the monkey’s face will shake when he is somewhere on one of the islands. 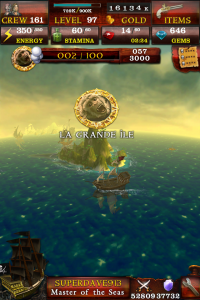 You will need to scroll around the game until you find his face hovering over the island. 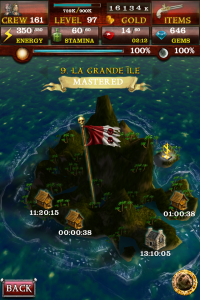 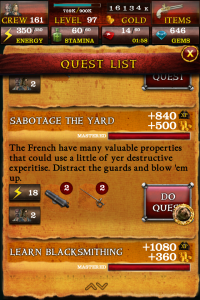 Once you complete the quest, you’ll be given one of the pearls. 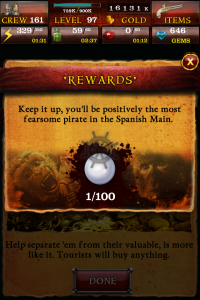 I think it is cool that they have these different challenges and sub-games. I’m curious to see how long they continue doing them.