Those who know their Disney history, will know that Tokyo Disneyland was the first park Disney built outside of the United States. Tokyo was given this great honor, due to the Japanese people being ultimate fans for Disney!

Knowing that there is such a fanatical love for Disney in Japan, it is not surprising to learn that Disney exclusively markets some products to them. Today, Disney has announced another round of Android smartphones in Japan. You’ll notice that the phones have a very familiar look to that of the iPhone, but with a detail of Mickey ears as the home button. With these new phones having 1Ghz processors and 8MP cameras, they are fairly standard specs to other Android phones on the market. 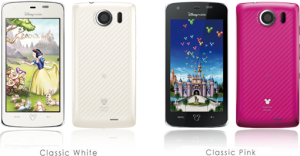 I’m sure there are a fair number of people in the United States that would like to get one of these in their hands!