A few days ago I posted about the announcement of Club Penguin’s Puffle Launch release to the App Store. I wanted to make sure to take some time to really get into the game and test out its game play. 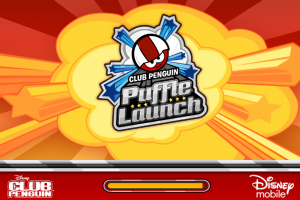 I’ve now had a couple days to play! I love this game, and it is my new addiction. While I certainly knew of the Club Penguin brand, I had never had any reason to be interested in it. Had it not been for my efforts on this site, I probably wouldn’t have ever given it a chance. I am really impressed with what they’ve been able to accomplish with this game! 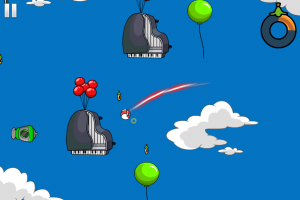 Puffle Launch really reminds me of Angry Birds ([itunes link=”http://itunes.apple.com/us/app/angry-birds/id343200656?mt=8&uo=4″ title=”Clickgamercom-Angry_Birds”]) and Cut the Rope ([itunes link=”http://itunes.apple.com/us/app/cut-the-rope/id380293530?mt=8&uo=4″ title=”Chillingo_Ltd-Cut_the_Rope”]). It is similar in that you have to use some puzzle solving skills to be able to pass a level. As the levels progress they add additional controls and interactions that increase the difficulty to be able to complete the section. 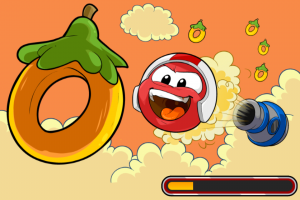 The initial release of the app includes 2 sections with 12 levels each. According to their site, you should “watch for updates” which implies they will continue adding sections much like the popular Angry Birds. As you are working through each level, you are gathering “Puffle O’s”. The gauge in the top right of the screen shows how many of the total you’ve grabbed so far. At the end of a level, the Puffle O’s are converted to coins. It appears that Disney had come up with a way to cross-promote the game with their ClubPenguin.com website! According to the official FAQ:

Since I am not a previous fan of Club Penguin, I had no idea what this meant!? Apparently you can use the coins for other Club Penguin adventures:

“Use coins to purchase virtual items such as clothes, furniture, puffles and more. Coins are removed from the inventory when items are purchased.
Real money cannot be used to purchase coins, nor can coins be transferred from one account to another account.”

This seems like a great concept, and will probably be very exciting for long-time fans of ClubPenguin.com 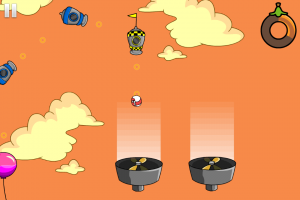 Overall, I think it is a great game that will be very popular. I am currently addicted to playing Puffle Launch, even though I’m not a Club Penguin fan. I’ve also converted my wife to be addicted to this game, and she was forced to buy it on her own iPhone. At the current price of $0.99, it is easily worth the value.